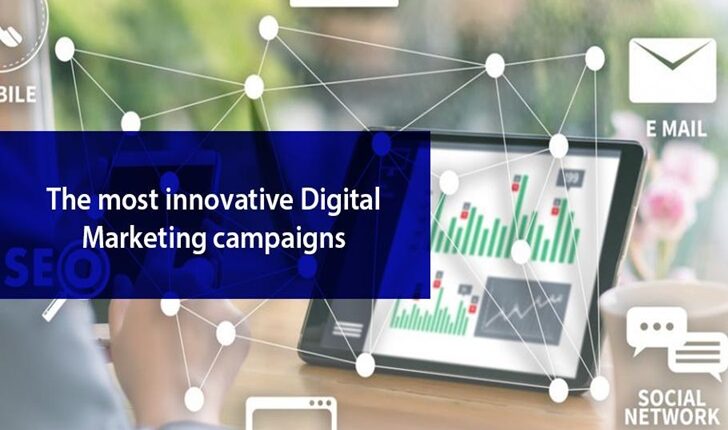 The Most Innovative Digital Marketing Campaigns

As a customer, what do you think is the biggest problem with this line? Simple, it’s incredibly bland and boring. It doesn’t engage you and almost feels desperate in how it’s communicating the message. The problem over here isn’t in the message itself; it’s in how that message is being conveyed.

This is why advertisers and marketers place so much emphasis on developing big ideas and creative marketing campaigns. Just think about it yourself, would you be interested in buying a product if it is shoved in your face? Of course not!

A creative marketing campaign does so much more than just communicate the value of a product to customers. It helps establish the brand in the minds of customers.

The latter part is especially essential in the digital landscape, where your competition is not just limited to a specific location. In such a competitive environment, you need to go the extra mile to develop campaigns that are not just clutter-breaking but also innovative.

Sure it sounds like a daunting task, but there have been several examples of popular brands that have created memorable campaigns that caught customers’ attention and helped the brand grow. Here’s a look at some of these campaigns:

Alexa Has Lost Her Voice

Amazon’s Alexa is so much more than just a voice assistant program. It’s almost a separate brand in itself, one that has become an integral part of our everyday lives. Can you imagine what it would be like if one day Alexa lost her voice?

Amazon explored this scenario in their now infamous ‘Alexa has lost her voice’ campaign. The campaign was supported by a commercial that aired during the Super bowl in 2018.

The 90-second ad featured a woman who asks Alexa about the weather. However, instead of replying, the voice assistant coughs and dries up. The news is worrying for Amazon’s CEO Jeff Bezos, but his aides assure him that the situation is well in control. The stand-ins are ready.

Only these are no ordinary stand-ins. They include the who’s who from the world of acting, cooking, and music. Only they are nowhere near as helpful as Alexa. For example, Gordon Ramsay berates a user who asks for instruction on making a sandwich, Cardi B questions a person regarding why they would want to go to Mars when they ask for the distance between the planets.

The situation seems to be getting out of control when Alexa finally gets back her voice and makes a much-needed return.

The campaign was an instant success and earned over 47 million views for Amazon. It also established Alexa as an irreplaceable voice assistant, something without whom customers couldn’t survive.

Changing your brand’s name is never an easy decision for any company, but IHOP—International House of Pancakes— was keen to take up this challenge.

Back in 2018, the company mysteriously changed its name on all social media channels from IHOP to IHOB. Moreover, they started posting cryptic tweets such as “Dear internet, we abbreciate your batience, now let’s see who guessed right. B-hold! #IHOB”

Naturally, this switch caught the audience’s attention. People wanted to know what the B stood for, and some of the suggestions that came up on social media were bacon, bananas, breakdancing, and even the name Bill.

In the end, it was revealed that the B stood for Burgers. With this campaign, IHOP wanted to communicate that it cared as much about its new burgers as it did about its pancakes.

The campaign was a big success on social media, and IHOP accumulated more than 247 million impressions within just a week.

People especially enjoyed the mystery element attached to this campaign, and that is what made it such a massive success.

Back in 2018, Nike was about to launch its new cutting edge running shoes known as Epic React. To support the launch of this shoe, the company needed an engaging and immersive campaign. This led to the development of the Reactland campaign.

This campaign was supported by rich media content on social media, websites, and mobile app. However, the most memorable part of the campaign was the Reactland initiative.

In this initiative, potential customers were transported to a world that resembled a retro video game like Super Mario Bros. A picture of the players was taken using a big green screen. This picture was then used to create an avatar of the person who was then placed in the game.

The player wore Nike React shoes, and ran on a treadmill. As they ran on the treadmill, the player’s character moved within the virtual world. Players had the option of running, jumping over obstacles, and climb over buildings.

The end goal of the campaign was to get people to try the new react shoes, and the campaign results suggested that Nike succeeded in its mission. The company market share has increased by 7% since then.

Every Ad is a Tide Ad

How do you overcome a cliché? How do you communicate the same message again and again while staying innovative in your communications?

The team at Saatchi and Saatchi was facing this dilemma. The ad agency couldn’t figure out how they should talk about dirty stains differently. The agency did come up with a unique idea, but it was a subversion of the messages they had sent out in the past.

In the new campaign, the agency didn’t target dirt stains at all. Instead, they talked about cleanliness. The insight was that in advertisements, people are wearing clean clothes, so technically, all ads were Tide ads because Tide is equivalent to cleanliness.

The results were spectacular. #TideAd was trending for the entire Super Bowl week. It further cemented the brand’s reputation as the number 1 detergent in all of America.

Super Bowl is a time when all brands in the country up their advertising game. Twitter had no intention of being left behind, so the company came up with the #BrandBowl.

Brand Bowl was a competition that pitted brand marketing teams from different companies against each other. These competed with one another in categories that were related to online engagements.

The winner of the competition got credits for Twitter ads along with audience engagements.  They received a custom trophy, and well, they also had the bragging rights. After all, they were the winners of the brand bowl.

For Twitter, this campaign was a success because it turned them into the center of attention. It was the playground upon which brands were competing against each other for the world to see.

Oreo has had a history of capitalizing on news related events to create effective marketing campaigns. Its Dunk in dark campaign is one of the most successful campaigns based on the newsjacking strategy.

Oreo’s aim with this campaign was to cash in on the power outage during the Super Bowl. The campaign was such a big success that it generated as many retweets as Beyonce’s halftime show.

The company has since then gone on to create several other campaigns such as the infamous #GameOfCookies campaign, but it all started with the Dunk in dark campaign.

Time to Get Creative

So there you have it, some of the most successful digital marketing campaigns of all time. Needless to say that this field is evolving with each passing day, so there are plenty of opportunities for you to create campaigns that are as unique and innovative as the ones mentioned previously.

The trick is to do your research and gather as much audience insights as possible. Always remember, people appreciate creativity, so don’t be afraid to explore.

Baldwin Jackson is a successful digital marketer with expertise in search engine optimization and content marketing. The perfect balance of his analytical ability and creative thinking is what sets him apart from other practitioners in the digital marketing realm. He has helped a lot of small and medium-sized businesses in crafting their digital marketing strategies that are not only cost-effective but delivers results as well.

Baldwin is also a proud father of two kids and a Sports enthusiast. When he is not working, you will find him watching ESPN and NFL network. He has been able to get an amazing package on his favorite channels from Buytvinternetphone.com.

Why Choose Edible Marijuana, THC? What you need to know?

What Is An Employment Background Check? Find All Details Here!

Outstanding Features Of Enclosure In Fiberglass

5 Tips to Speed Up Your Assembly Lines and Increase Profits